Holy cow I love your eyes

So remember back in December when I post this?

Well I came this 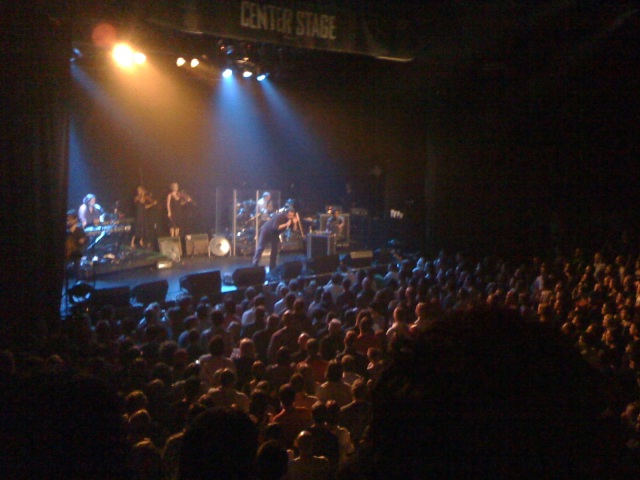 How I ended up that close to Mr. Garvey is a saga that started perhaps 6 months ago.

I got an email saying that my favorite band, Elbow, was opening for Coldplay on some of their stops of their American tour.  I was extremely excited by this news and immediately started working on MrBunny to go.  He hates concerts with a fiery passion.  Hates them.  And usually I’d be okay with going by myself but I hate going to those huge venues alone.  I don’t know why, but I do.

So he suggests why don’t I ask one of my siblings?  I call my brother who says yea he’d love to go but needs to check his vacation time.  Finds out he wouldn’t have the time so he can’t go.

So I let it go for a couple of months.  Then I started thinking about it again and trying to convince MrBunny that he really did want to go.  To no avail.

Fast forward to about 6 weeks ago when I happened to looking at a page that listed Elbow’s tour schedule.  Sure enough there was still the Tampa concert but even better… there was a show in Atlanta that they were headlining!

By this time (obviously) we’ve moved up to south Georgia and are within a 3 hour drive of Atlanta.  So I email the husband.  Same reaction.  Hates concerts doesn’t really want to go.  So I just let it go.  Pick your battles (I also wanted to go see Chicago at the Fox in Atlanta so I figured I’d just pick that one).

Time goes by and we find out that our friend’s daughter is having her birthday party that afternoon so I give up all ideas of going- bummer because in the back of my mind I still really wanted to go.

Friday morning.  Because I’m a glutton for punishment I check to see if the show sold out.  It hadn’t (which was exciting and sad at the same time- I want them to do well/sell out shows so they come back soon) so I called my friend and asked what time the party was.

When she said 2 the wheels started spinning.  Surely a kid’s party would be over by 4.  The doors opened at 8 and the show didn’t start until 9 so there would be plenty of time to get up there.

And so the calls to MrBunny began.  I finally got him to agree to going.  Tickets were purchased before he could change his mind!

So about 4:30 on Saturday afternoon we were on the road to Atlanta.  Got into town and after a few brushes with death, I found myself walking up to the Center Stage Theater.

If you ever have an occasion to see a show/concert/whatever at the Center Stage Theater- do it.  No joke, one of the best venues I’ve been in.  Great sound and there isn’t a single bad seat in the house.

We were at just about entrance (from the lobby) level and it was perfect.

So we’re sitting there waiting for the show to start and MrBunny asked who was opening for them.  I said I didn’t know so he looks it up on his phone.  I think he just googled “Elbow Atlanta”.  A few moments later he leans over and says it looks like a group called “Georgia Hand and Shoulder”.  Cool- sounds like a local group.  Sort of amusing that they are opening for elbow but whatever.

It wasn’t until the site loaded that we realized it was actually these people.  I can not tell you how funny we found that.  I could not stop laughing.  Even today, a couple of days later, it is still funny.

Despite the fact that I was surrounded by people who didn’t seem all that familiar with the entire body of Elbow’s work (seriously the guy behind me asked his friend if Newborn was a Coldplay cover- that was a painful moment) it was an awesome experience.

Guy Garvey is very much an entertainer.  He interacts with the audience with an enviable ease.

It started off with Starlings.

(This is not from Atlanta- and don’t worry I’m not going to put up the entire concert.  Just some of the major highlights.)

How could you not a love a band that plays brass as well?  Albeit one note.

They did a few from Leaders of the Free World and then did Grounds for Divorce.

Apparently (so I heard from the guy behind me) this song is on a promo for House right now.  I don’t have cable so I had to take his word for it.

They did one of my favorites- The Loneliness of a Tower Crane Driver.

Then the aforementioned “not a Coldplay cover” Newborn.

A pet peeve that only has existed within the last couple of years.  I hate when people record most of a song only to cut off the end.  Oh well.

And to close out the night- one of my favorites.  Scattered Black and Whites.

I’ve been to many concerts and this was by far the best.  If you haven’t heard of Elbow, seriously go to itunes and start downloading.  You will not regret it!

Remember how much MrBunny did not want to go to this concert?  We spent the entire drive home listening to Grounds for Divorce, Weather to Fly, and Audience with the Pope (which they didn’t do- MrBunny was bummed).  And he has even downloaded some of the songs onto his own phone.

It took every ounce of willpower to not say “I told you so”.  Well to at least wait a couple of hours before saying it!

Amanda is amazing. Amanda is spectacular. Amanda is humble. Amanda is also a full time college student so take pity on her and don't complain when her TV reviews aren't up immediately following an episode.
View all posts by Amanda Broyles →
This entry was posted in Uncategorized and tagged 8/8/09, Atlanta, Center Stage Theater, Elbow, Grounds for Divorce, Newborn, Newborn is not a Coldplay cover, One Day Like This, Scattered Black and Whites, Seldom Seen Kid, Weather to Fly. Bookmark the permalink.