So the husband had some comp time that he needed to take.  We had originally planned on going down to south Florida with some friends.  Once all our friends bailed on us we decided (the afternoon we were supposed to leave mind you) to change our plans and go on a road trip instead.

Unlike myself, MrBunny has not seen much of this country so he left it in my capable hands to come up with a itinerary.  I decided that we’d go up to one of my favorite places- the east coast.

So we set off on Thursday night and got through Georgia and into South Carolina- parts that we had already driven through and seen.

Got up on Friday and drove up into North Carolina.  Once we got to Rocky Mount we took a right and headed out to the Outer Banks.

After a stop for lunch at Goombay’s (ahh the memories) we quickly ran into the Food Lion in Kill Devil Hills in hopes of finding Carolina Critter Sauce.  Much to my dismay they did not have any.

Right down the street was the Wright Brothers Memorial.

(Just a little Ironbunny trivia: Members of my family have lived in some places with rather interesting aviation history.  I went to college in Dayton, OH which is the home of the Wright Brothers and later spent many a weekend in Kill Devil Hills a mere mile or two from Kitty Hawk.  My little sister and brother both went to Benedictine College which is in Atchinson, Kansas… the home of Amelia Earhardt.  No joke they have a bridge that leads into town that is lit up and says something like: “beckoning Amelia home”.  )

It was drizzling a little bit so we just drove around the memorial instead of climbing the hill.

That would be the statue that is by the memorial.

From the Kill Devil Hills we drove up north to Duck.  MrBunny loved the fact that the Brew-Thru’s were actually called Brew-Thru (I was unaware they were called anything else). 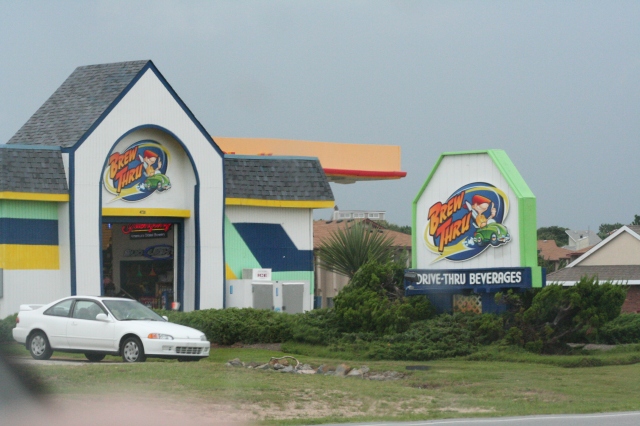 Part of the reason of heading into Duck was to see if a store I knew had Carolina Critter Sauce was still open.  Sadly it was not.  And while we were there the skies opened.  It got so bad I couldn’t see hardly at all.

Luckily MrBunny was able to get a few pictures right before the deluge hit us.

From there we headed back down and then up into Hampton Roads.  As usual I got lost in downtown Norfolk (I think I’ve gotten lost at least 9 out of 10 times I’ve had to go down there) but I was able to find my way over to the Naval Station that MrBunny wanted to see. 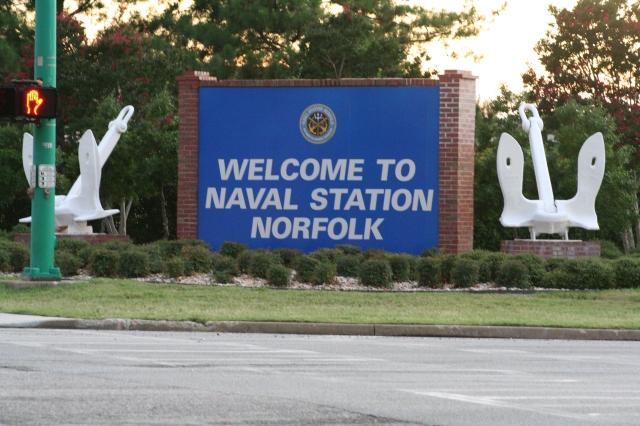 I then got lost going into Newport News.  It should be mentioned that in each of the unfamiliar cities we visited I had no problem, but as soon as we roll into a place I’ve lived twice I get completely turned around and lost.

Just to give an idea of what type of travel photographer MrBunny is:

I assure you this will not be the first road sign in this post.  Oddly enough- he doesn’t ever get state signs.  It is obvious he has never traveled cross country with my mother.  There are many a picture of my siblings and I standing in front of “Welcome To” signs by the side of the interstate.  Good times.

He did catch a good one of sunset over one of the many bridges in the Hampton Roads area.

Anyways- that night we stayed at a very sketchy Motel 6.  Very sketchy.  We found out that Motel 6 does allow dogs but only one per room.  Yea, right.

We got up the next morning and headed out towards Virginia Beach way.  Why?  So we could go out the Chesapeake Bay Bridge Tunnel.   Back when I worked at a parish there in Newport News, we used to go out to the Eastern Shore every week or so and bring material assistance supplies to migrant workers there.

It’s made up of two tunnels and then the bridges that connect them.  I think at one point it was voted as one of the “Seven Engineering Wonders of the Modern World.”

The second tunnel.  We didn’t get many pictures of the bridges because it was raining out and the visibility out on the water was shit. 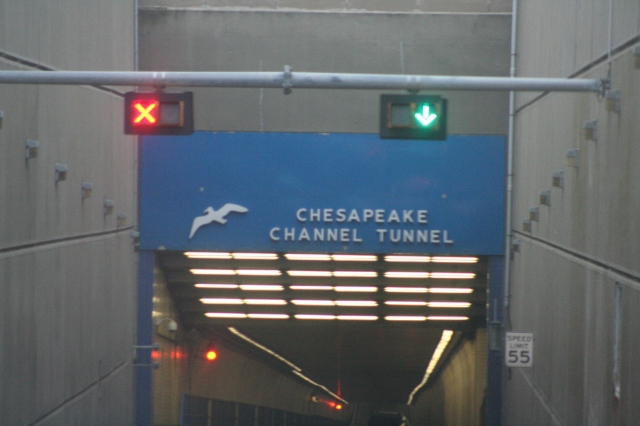 This is where we were headed (I told you it wouldn’t be the last highway sign you see).

We drove through the very pretty Eastern Shore.  Up into Maryland (imagine a state sign here) and then into Delaware (and here as well).

Delaware is actually where we spent the most time with the least amount of miles.  We sat in traffic for quite some time.  A long time.  Of course it was Saturday afternoon by that point so I imagine many people were headed out towards Rehobeth and various other Delaware beaches.

Oh and Saturday was also the day of ridiculous tolls.  I thought MrBunny was going to have a stroke when I handed over $12 for the Chesapeake Bay Bridge Tunnel.  Then we were on some toll road in Delaware and you would have thought they’d asked for a kidney instead of $2.

I’m going to take a break here.  I’ll start working on the next section and should have it up in the next couple of days.